3.2 Concepts
3.2.1.The three dimensions of grammar
​Most linguists will agree  that it is possible to distinguish three elements in grammar. These elements define the particular characteristics of the grammar patterns that are present in a language progam. From now on we will call these grammar items 'target grammar.' These three elements are Form, Meaning, and Use. Larsen Freeman proposes this approach to analyze grammar and also to define the content of grammar teaching. These three dimensions can be expressed in the following image. 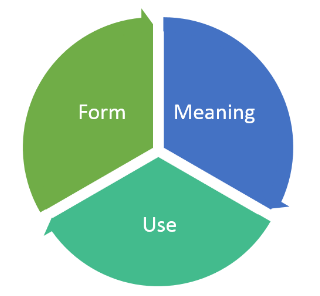 3.2.2 Form
Form refers to the sentence structure. It can also include the inflections or changes that words take when changing their meaning like the form of the simple past regular verbs which take and -ed ending. The grammar form, in some way, can be easily looked at from the simple reading of the sentence. Form then refers to the rules that govern a specific type of sentence in a chosen tense. In the sample sentence, the form would be dictated by the rules applied when forming the passive voice.

In the example above,  form would refer to the rules which states that the passive voice is formed by placing the past participle of the main verb after one of the forms of the verb to be which shoud be in concordance with the sentences subject.Usually, language teachers pay more attention to explaining form since this the the grammar dimension in which  rules are present and its teaching seems a bit more evident and gives the teachers the 'aura' of being true experts in the field. However, this is not the only important dimension of grammar.

3.2.3 Meaning
Meaning refers to what the sentence is trying to actually communicate. We can understand meaning as the mental picture or understanding that a sentence produces in a listener or reader. At times, meaning should be evident from the same sentence, but there are times in which meaning might not be directly conveyed by the structure of a sentence. Let’s take for example the two following sentences:

The grammar structure for the two sentences can be summarized as:

Although the structures in the two sentences look very similar, the meaning is different. In the first sentence, any English speaker will understand that the person asked someone else to cut his/her hair while in the second sentence the person cut his/her her by himself or herself.
Another example in the simple present:

Again the structure for the two sentences is the same; however, the meaning changes radically. In the first case, a person is going out from the room while in the other case the person is dropping the book somewhere.
3.2.4. Use
Use refers to the adequacy of the sentence within a context. Questions as when to use or why to use a specific sentence structure should be answered when dealing with grammar use. It also reveals the pragmatic (social) use of a specific form which implies the level of formality and its function.

For example, two friends talking about money might simply say “Can you lend me 10 dollars?”, while a employee talking to a boss asking for some money raise would probably say: I was wondering if you could lend me some money. This shows that the decision between the use of the simple verb 'can' or a more sophisticated expression will be determined by the person to whom the request is addressed.
​Another example:

3.2.5. The Learning challenge
Should teachers always teach all three dimensions form, meaning, and use at once? Not necessarily. Very often, it is one of the aspects of the three dimensions which present the most difficult challenge to students, For example, teaching the phrasal verbs offers just three form rules, but the actual meaning of each phrasal verbs is the real challenge for students. Another example is the use of wish. Its meaning is pretty evident as well as its level of formality, but the fact that in the subjunctive form all the pronouns (I, you, he, she, it, we, and they) are followed by the verb be “were” could represent a challenge for students. This is why teachers should be skillful enough to decide on which aspect of the three dimensions is the most challenging and teach accordingly.